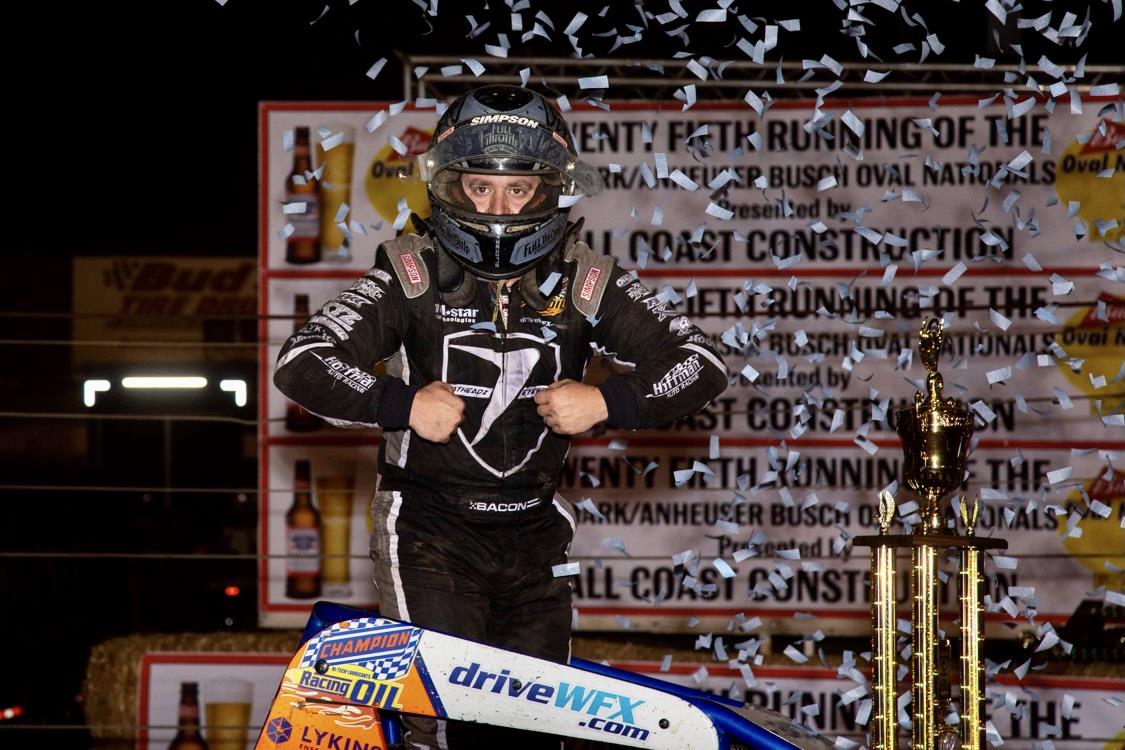 Perris, California (November 5, 2021)………In a season that has been earmarked by a consistency matched by no other individual, feature wins have been, rather surprisingly, relatively few and far between for USAC AMSOIL Sprint Car National Championship point leader, Brady Bacon.

As it turned out, all the Broken Arrow, Okla. native needed for that to occur was a little bit of good fortune to fall his way, somehow, someway.

Bacon became the leader for the third and final occasion while Justin Grant’s car faltered with a broken nozzle line in Friday’s night two of the Heimark Anheuser Busch Budweiser Oval Nationals Presented by All Coast Construction at southern California’s Perris Auto Speedway.

Bacon cruised past the rapidly slowing Grant on the last of the 30th circuits to prevail with his fourth win of the year and marked his first time standing in victory lane since July’s Indiana Sprint Week round at Bloomington Speedway.

The three-time series champion’s 39th career USAC National Sprint Car feature win moved him to within one of Gary Bettenhausen for 8th on the all-time win list. Bacon’s third career Perris win also went toward cementing his bid for a fourth career title as he incrementally elevated his lead from 63 to 64 with just three races left on the championship trail.

“We’ve had a good enough car to win a bunch of races this year and it just never went our way,” Bacon explained. “Tonight, we probably didn’t deserve to win but we did, so we’ll take it after all the races we’ve lost throughout the year.”

After experiencing a rare downward descent when starting from the front row during Thursday night’s opener at The PAS, Bacon was bound and determined not to let history repeat itself on consecutive nights. Bacon led the opening three circuits before being overtaken by Thorson, then regained the top spot from him just past halfway, then saw his lead slip into the abyss with Grant getting by just three laps from the end.

“I made a mistake there by letting him by,” Bacon recalled of Grant’s late-race pass. “We just had a little luck on our side tonight and I was able to capitalize on that and get the win. I thought we had a pretty good car, but we just got a little tight there after those couple cautions, probably because of low air pressure, which caused it to push really bad off four. After he got me, I just tried to not make any mistakes and, if he did, I was going to be able to capitalize. Unfortunately for him, something happened, but we’ll definitely take it after the year we’ve had.”

Bacon initially lost the lead to Thorson on the fourth lap when Thorson went third to first within a half lap, first charging by Grant for second midway down the back straightaway, then dove to the bottom of turns three and four to swipe the lead from Bacon.

Following a front straightaway flip performed by Sterling Cling (24th), which also ensnarled Danny Faria Jr. (25th) on lap five, Grant relegated Bacon back to third on the sixth lap as Grant muscled his way under at the exit of turn four to put himself in the runner-up spot. Bacon ultimately regained the second position from Grant a mere three laps later.

Out front, Thorson continued to pull away on top, with everyone else following suit on the high line in their pursuit of the 2015 Turkey Night Grand Prix Midget winner when it was held at Perris.

Thorson, meanwhile, had lost his brakes about halfway through, and the issue came into focus as he attempted to put Tommy Malcolm a lap down in the running order with a turn one slider on the 17th lap that initially worked in his favor. However, as Thorson drifted past and glided up the racetrack, all momentum was lost, and opportunity was gained by both Malcolm to get his lap back momentarily as well as Bacon to race past and become the new leader.

As Bacon caressed a 2.089 second advantage with 10 laps remaining, Carson Short and Logan Williams were waging their own battle for the 17th position, which resulted in Williams enduring a rapid tumble after contact with both Short and the wall sent him on a wild ride of which he walked away from.

While Thorson went on the attack in turn two for second with Grant on lap 22, Grant had his sights set on ripping away Bacon’s lead entering turn three. Grant ably pulled even with Bacon through the corners but was unable to make a successful go of it as of yet.

Grant tailed Bacon around the entire circumference of the half-mile dirt oval from his view a half-car length back as the two crossed underneath the flag stand with three laps to go. That’s precisely where Grant made a swift maneuver to the bottom of turn one and stole the lead away with the race’s distance waning in the balance.

Taken by utter and complete surprise just two laps later, Bacon pounced as Grant slowed to a crawl on the topside of the racetrack, clearing him between turns one and two as he cut underneath Grant with Thorson in tow to second. Thorson nearly climbed Grant’s left rear tire coming off turn two, which stifled him momentarily, and allowed Bacon free reign to put the clamp and his stamp on the victory over Thorson, Kevin Thomas Jr., C.J. Leary and Thursday’s winner Jake Swanson.