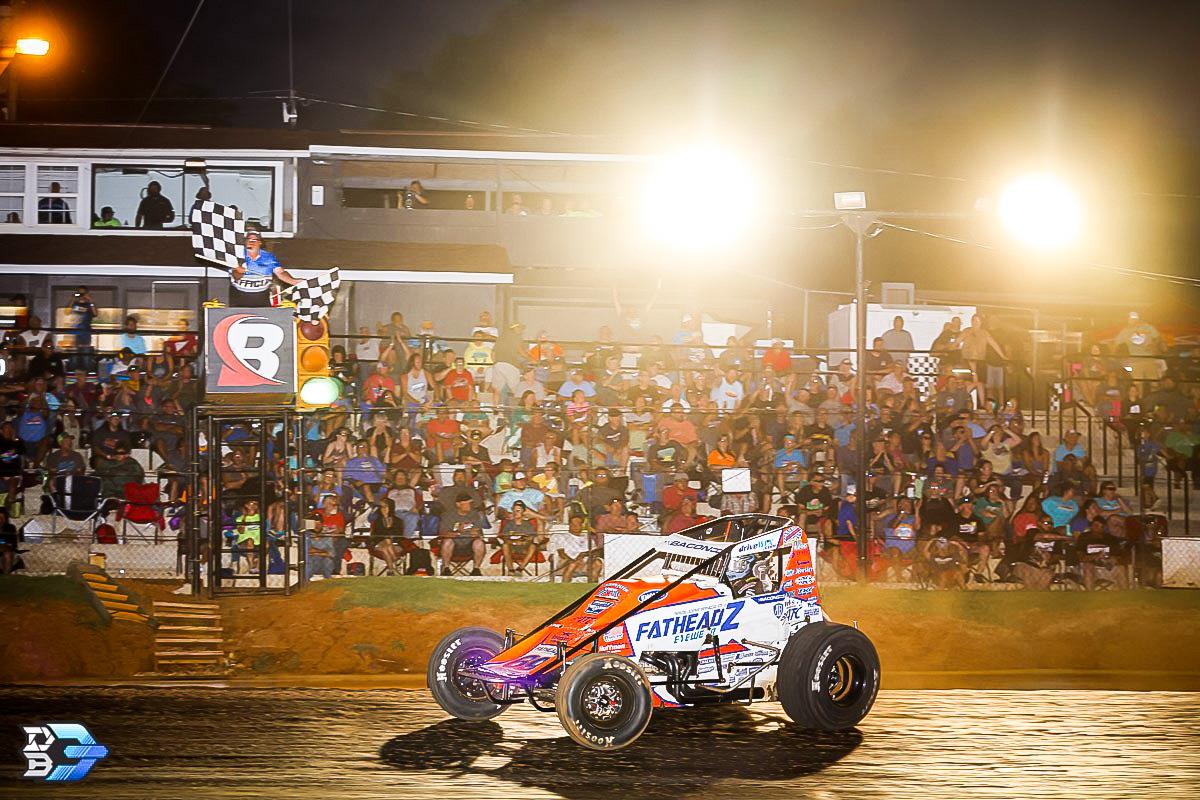 Bloomington, Indiana (July 30, 2021)………Twenty-four hours earlier, Brady Bacon and the Dynamics, Inc. crew experienced the lowest of lows when a magneto issue knocked the team out of the feature at Lincoln Park Speedway before the green flag had even been waved.

Twenty-four hours later, the team was standing in victory lane, celebrating its first series victory in more than three months on Friday night following the Sheldon Kinser Memorial, the sixth and penultimate round of the 34th annual USAC NOS Energy Drink Indiana Sprint Week by AMSOIL at Bloomington Speedway.

Once again, resiliency from the Bacon/Hoffman/Dynamics camp was on full display, as for the second year in a row, the team endured a similar magneto fate at Lincoln Park one night, then bounced back the following evening with a feature victory for the Dynamics, Inc./Fatheadz Eyewear – Elliott’s Custom Trailers & Carts – TelStar/Triple X/Rider Chevy.

“It’s just a testament to the whole Hoffman team,” Bacon praised. “When something goes wrong, we put our noses down and keep working. We know we’re doing the right thing, it’s just that sometimes things get out of your control. You just can’t get down about it. You just plug away and keep trying.”

The victory also proved special as it thrusted Bacon back into the thick of the Indiana Sprint Week championship race following heartache the night prior that dropped him from first to fourth. Heading into Saturday’s finale at Tri-State Speedway in Haubstadt, Bacon now rides just 12 points behind point leader Logan Seavey in his quest to earn a first ISW crown since 2016.

Despite having not won a USAC National Sprint Car feature since April 22 at Pennsylvania’s Grandview Speedway, Bacon had constantly found himself in contention at the front, as proven by recording a series-high 22 top-fives throughout his first 25 starts. As proven time and time again, even when the racing gods weren’t exactly on their side for the night, the team found a way to plug away and find success substantially more often than not.

“Sometimes the racing luck just doesn’t go your way,” Bacon acknowledged. “We just know that it’s coming. It comes in waves. Some guys have good luck like Seavey went on a tear and started in the front every night and was able to capitalize and win. We’re able to grind it out even if we get dealt a bad hand and able to get a good finish when we’re capable of doing that. That’s how we’re going to try to win this championship. If we get lucky, we might even pull off Sprint Week.”

Bacon started fifth in the 22-car, 30-lap main event and had a front row seat for a tumultuous first lap which saw the front row of pole sitter C.J. Leary and Chris Windom take the fight side-by-side through turns one and two.

Atop the turn two cushion on the opening lap, Windom become airborne, landed on all fours and spun 180 degrees to a stop in an incident nearly reminiscent of the much-ballyhooed altercation between Leary and Thorson on Thursday at Lincoln Park. Windom restarted from the tail and worked his way back to a 12th place finish at the checkered.

During the first third of the event, it became a three-car breakaway at the front with Leary leading fourth starting Kyle Cummins and Bacon. Bacon worked tirelessly on Cummins for the second position, and with the three running nose-to-tail, Bacon managed to slide up in front of Cummins exiting turn four to slot right in between the first and third place cars.

Closing in on the tail end of traffic on lap 13, third-running Cummins fell away from contention momentarily as he lost his footing over the turn two banking and dropped back into the distance.

Two laps later, on the 15th circuit, the same fate befell race leader Leary who found himself over the edge in turn two, losing the top spot to Bacon who raced by underneath, then subsequently dropped to third four laps later as Cummins charged his way back into the runner-up spot.

Meanwhile, sixth-starting Tanner Thorson had navigated his way up into the thick of the battle by racing past Leary in traffic for the third position on lap 23 amid his pursuit of a second-straight win after racing to victory the night before.

Leary reemerged in front of Thorson with a bottom side maneuver off turn four to lead by a car length at the line on lap 24. However, Thorson cut back under Leary off turn two on lap 25 to retake second, then had Leary pinned on the bottom behind the lapped car of Fatheadz Eyewear Fast Qualifier Brent Beauchamp between the third and fourth turn.

While Bacon desperately tried to navigate a path by a three-wide swath of lapped traffic at the back end of the field, his nearest pursuant Thorson’s run in second was short-lived, however, as, one lap later, Thorson’s bid for a repeat victory came to a halt when his right rear tire gave way on the back straightaway, necessitating the yellow flag. Thorson returned with a new right rear tire to finish 15th, suffering a severe crimp in his hopes for an Indiana Sprint Week championship in his first attempt.

Despite finding himself in a whirlwind logjam, a yellow flag to clear the path wasn’t necessarily the thing Bacon wanted to see at that moment. Everything else, however, fit him to a T on this particular night.

“The yellow at the end kind of worried me because I had a pretty good rhythm going even despite the lapped traffic,” Bacon explained. “I think I was about to pick through them. We’ve worked really hard on (our slick track program) and, for the first part of this week, we didn’t get to utilize much of it. The tracks were pretty hammer down and put us out of our comfort zone a little bit. But tonight, it was pretty slick.”

During the final five-lap sprint to the checkered flag, Bacon went undeniably unchallenged as he scored his third series victory of the year and his second with the USAC National Sprint Cars at Bloomington, and first since 2019, by a 1.448 second margin over Kyle Cummins, C.J. Leary and Kevin Thomas Jr. with Robert Ballou rounding out the top-five.

“I look forward to this race during Indiana Sprint Week every year; we’re usually pretty good here,” Bacon acknowledged. “The cushion made me a little nervous because that’s not really our forte. We kind of put all our eggs in the slick basket and it worked out for us.”

Kyle Cummins (Princeton, Ind.) earned his best result of 2021 Indiana Sprint Week with a second-place finish in his Rock Steady Racing/Mid-America Safety Solutions – Project Oversight/Mach-1/Cummins Chevy, recovering from a bitterly disappointing end the night before at Lincoln Park when a last lap incident negated what was going to be a top-five finish.

“Brady is really, really good here running right through the middle; I don’t know how he does it,” Cummins pondered. “I tried a little bit and, a couple times, I felt like I had a little bit of grip. His drive off and side bite on the straightaway is unbelievable.

All in all, it was a pretty good night for us,” Cummins continued. “We struggled a little bit in the heat race, and we made some changes. Starting up front is a huge deal. Any of these USAC races, starting up front is a big deal. I was doing all I could do around the top, and when he came by me, I changed my shocks, changed my line a little bit, and it just didn’t seem to help. There at the end, I thought maybe I had a little bit of something, and then he just pulled away from me. He’s really good here and we just need to get our car a little bit better, then we can start clicking off some wins.”

“We just didn’t get the car quite tight enough,” Leary admitted. “This is Indiana Sprint Week. These guys are tough. I felt like I could roll the bottom there at the end and maybe get Kyle back. I knew Brady was going to be too good the way he was rolling right through the middle. I want to apologize to Chris Windom for missing the bottom a little bit there on the start and sliding up. We didn’t really make contact, but I feel like I may have scared him a bit and he got into the cushion.”

Brent Beauchamp (Fairland, Ind.) earned his third career Fatheadz Eyewear Fast Qualifying time with the USAC National Sprint Cars and his first during Indiana Sprint Week since the series opener in 2012 at Gas City I-69 Speedway.