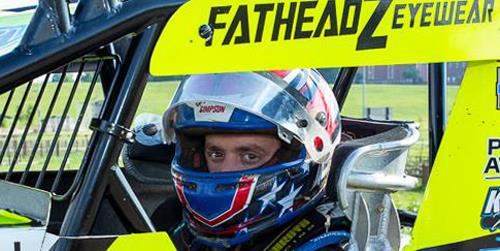 Lonnie Wheatley, WINCHESTER, Ind. (September 22, 2020) – In the midst of a torrid battle for a third career USAC Sprint Car championship, Brady Bacon is set for a busy week of racing action at three tracks in three different cars.

It begins with Bacon in winged 410-ci action on Tuesday and Wednesday after being voted into Eldora Speedways’ “Governor’s Reign” by the fans. Piloting the Fatheadz Eyewear No. 69, Bacon will vie for Tuesday’s $10,000 winner’s share and then Wednesday’s $52,000 payday at the invitational event.

Then, after an idle night, “The Macho Man” is in for double-duty with the USAC National Sprint Cars and USAC National Midgets at Gas City I-69 Speedway on Friday night and then Kokomo Speedway on Saturday night.

Bacon will pilot the Hoffman Racing Fatheadz Eyewear No. 69 entry in the Sprint Car portion and the Hayward Motorsports Oilfire No. 19 in the Midget portion. While the Hoffman entry is Bacon’s standard USAC Sprint Car ride, Bacon gained the seat of the No. 19 Midget for the remainder of the season.

Bacon goes into the week off a USAC Sprint Car weekend that netted finishes of fifth at the Terre Haute Action Track on Friday and then eighth at Haubstadt’s Tri-State Speedway on Saturday night.

After timing in second-quickest at Terre Haute, Bacon gridded the feature event fifth and held the position throughout the 30-lapper.

Bacon then worked his way forward from the 12th starting position in Saturday’s 40-lap Haubstadt Hustler to salvage an eighth-place showing.