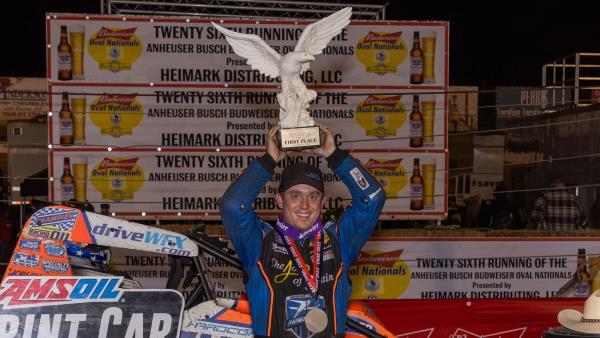 For Brady Bacon, winning four of the six Oval Nationals preliminary night features that have been held at California’s Perris Auto Speedway since 2019 was a nice feather to have in his cap.

However, the biggest prize of them all had eluded the 32-year-old driver for, quite literally, half his life.

Thirteen starts and sixteen years since his “Ovals” debut in 2006, Bacon had waited patiently for his time to finally arrive on championship night of the Heimark Anheuser Busch Budweiser Oval Nationals.

There was no more time spent in the waiting room for the Broken Arrow, Okla. native on Saturday night’s 26th running of the marquee event as Bacon had no room to wait any longer.

Starting fourth, Bacon tore around the outside of Friday night prelim winner Robert Ballou to take over third on lap four. When pole sitter Justin Grant drifted off the bottom in turn four on lap eight, again, Bacon was there to capitalize.

On the 11th circuit, Bacon took his ride to the front of the field, launching down the back straight and blowing past Axsom for the race lead, then carrying onward to score one of his largest paydays with a $20,000 score aboard his Dynamics, Inc./Fatheadz Eyewear – Cressman Sanitation – DriveWFX – Tel-Star/Triple X/Rider Chevy.

For the four-time USAC AMSOIL Sprint Car National champion, it was a long time to wait for a coveted “Ovals” win, and it was a long time coming. But, when all was said and done, this one was finally his, ending years and years of oh-so-closes and almosts.

“It feels good to finally get this one,” Bacon exhaled. “It seems like we always miss it a little bit for the Saturday night feature here.”

There was no such consternation this time around for Bacon, who had previously logged five top-five finishes on the final night of the “Ovals” throughout his career, bested with a third in 2017. Bacon led the final 30 laps to record his second feature victory in a three-night span.

The evening was a lucrative one for Bacon as he not only pocketed $20,000 for his Oval Nationals main event win, but also added a $10,000 bonus as the champion of the 10-race Bubby Jones Master of Going Faster series Presented by Spire Sports + Entertainment.

“This race is pretty important for our season financially,” Bacon explained. “If things faltered, or if I had a problem, it could’ve been a $20,000 loss. I was kind of nervous about that all day. Obviously, the goal was to win this race and now I’ve got a $40,000 swing the other way.”

Bacon didn’t exactly get away scot-free once he initially established himself as the race leader. Nearing the middle stages of the 40-lap feature, Axsom didn’t go away quietly as he kept pace with Bacon and, at times, was able to pull even in the fight for the lead.

Meanwhile, Gardner made an excursion to the Indy Metal Finishing Work Area, wounded with a flat right rear tire, which was promptly swapped out for new rubber that returned him to the race. Gardner eventually dropped out soon after and finished 22nd. Oval Nationals Rookie Daniel Whitley was pushed away as well until his right front wheel decided to go solo and rolled aimlessly on the track through turns three and four.

Thereafter, the biggest mover and shaker instantly became Jake Swanson. The seventh starting driver grazed the bottom, and when Ballou drifted up a full lane at the exit of turn four on lap 20, that left the door open for Swanson to scoot under Ballou for third at the halfway mark. Swanson then took on Axsom and shot underneath in turn three with three laps remaining to slot into second.

At that point, Bacon had race officials with Sharpies in hand preparing to endorse his name on the mega-sized victory lane check. His lead stood at four-plus seconds with little obstruction along the way, sans a singular pack of lapped cars that caused little to no hiccups on Bacon’s warpath of dominance on both ends of the half-mile dirt oval.

“We kind of had a little mixture,” Bacon noted on the team’s car setup. “We had turns three and four from Thursday night and one and two from Friday night, so we did a combination on the car. It was something that worked pretty well, and even though I was making mistakes on top, I didn’t think anyone else could do it a whole lot better than me.”

He was right. Nobody did it better than Bacon in any facet down the stretch as he went on to collect a monumental win for his team and himself after a trying week that took its emotional toll. Brady’s grandfather, Ted, passed away on Tuesday morning and the team has been competing with heavy hearts ever since. Brady soldiered on to win not once, but twice in three nights at the Oval Nationals.

“It was a sweet win we had, especially after the hard week we’ve had,” Bacon acknowledged. “We definitely had a smoother week than we normally have here so, hopefully, he was helping us out and we’ll take it. It sure is a good way to top off the season.”

Jake Swanson (Anaheim, Calif.) and his late-race effort earned him his best career Oval Nationals result. He swept by Axsom with three laps to go on his way to scoring a second place finish, besting his previous top Oval Nationals Saturday night performance of sixth one year earlier in 2021. Swanson finished the 2022 USAC National Sprint Car season on a high note with four podium finishes in his last five starts, including a 2nd, 1st, 3rd and 2nd in his Team AZ Racing/Beaver Stripes – RSS Industries – USW Cat Construction/DRC/1-Way Chevy.

“I’m glad we started seventh even though I wish we would’ve been in the Super Six and be able to start up there with those guys,” Swanson stated. “But starting seventh was the best case scenario for us tonight and we were able to methodically work the bottom and work our way up through those guys. By the time I got to second, Brady was already checked out. I didn’t even know how hard he was running it or where he was running it. I felt like I was all by myself out there. At some point, I’m going to win one of these eagle (trophies). I love this place too much and I plan on doing it. Hopefully, it will be in the near future.”

It was a highly impressive debut for Emerson Axsom (Franklin, Ind.) who led the first 10 laps of his first career Oval Nationals start en route to a third place result in his Clauson Marshall Newman Racing/Driven2SaveLives – ZMax Race Products/Spike/Kistler Chevy. Axsom ended the season as the top-Rookie finisher in the USAC National Sprint Car standings, which was part of the learning curve, among other things, that played a role in his result which rounded out the podium.

“I think a lot of it was experience and we also had a tire delaminate,” Axsom revealed. “It was a tough deal, but obviously, Brady and Jake are really good here. My guys gave me a really great car. That’s probably about the best I’ve felt all year, but it’s a little disappointing with the tire. This is the biggest race for us, and I wanted to win.”

Jadon Rogers (Worthington, Ind.) was the man of the move throughout his debut weekend at Perris. He advanced more positions across the past three nights of feature racing than any other driver with 21 cars passed. On Saturday, he traveled 21st to 8th, which clinched him a $1,000 bonus as the All Coast Construction Tony Jones Oval Nationals Hard Charger.

No driver passed more cars throughout the entirety of Oval Nationals than Tommy Malcolm (Corona, Calif.) who advanced 26 positions during the weekend, which encompassed heat races, C-Mains, the Super Six Dash, semi-feature and feature events. The effort worked in his favor as he came out on top of the ProSource Oval Nationals Passing Master award.