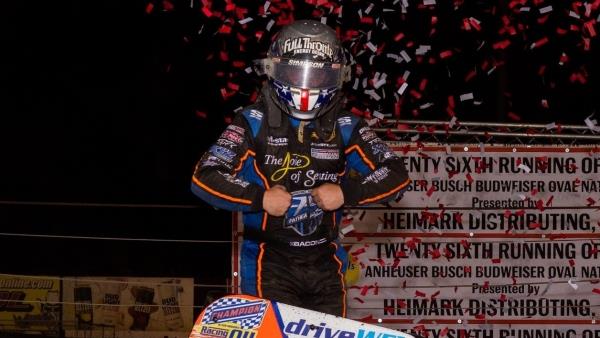 THIS ONE’S FOR TED: BACON’S TRIUMPH A SPECIAL ONE AT OVALS OPENER

When Brady Bacon stands on the throttle, everybody soon takes notice.

In a similar manner, the same could be said for Brady’s grandfather, Ted Bacon. When Ted spoke, everyone listened.

Sadly, the words of the Bacon family’s racing patriarch fell silent on Tuesday morning when Ted passed away.

It’s the same drill Brady had performed 44 previous times in his USAC AMSOIL Sprint Car National Championship career, but this one carried extra significance. This one was for Grandpa Ted.

When posed the question of what his grandfather would’ve said to him had he witnessed his victorious performance on Thursday night, Brady theorized that Ted would’ve remarked something short and sweet along the lines of, “Ahh, pretty good.”

Succinct and straight to the point. Just like Ted’s words of praise, Brady approached the start of the Oval Nationals in a highly-familiar fashion.

Brady reached the front of the field just six laps in, then raced away to his first USAC AMSOIL Sprint Car National Championship feature victory since June 19 – a span of 24 races and roughly four-and-a-half months – in his Dynamics, Inc./Fatheadz Eyewear – Cressman Sanitation – DriveWFX – Tel-Star/Triple X/Rider Chevy.

Grandpa Ted was a supermodified standout in his heyday during the 1970s-80 who competed against contemporaries like Emmett Hahn, Harold Leep and Mike Peters at dirt tracks from Dewey, Oklahoma to Hutchinson, Kansas. Yet, his grandson Brady’s feat sure would’ve been something he’d have been proud of, and something he’d have had no reservations telling Brady what was on his mind.

“He was hardnosed, and he’d tell you what he thought regardless of whether you had a dollar or 10 million or if you were five-foot tall or seven-foot tall. He didn’t care. He always liked to have a good time, did things his way and that was the only way. That’s what we always used to say. There’s Ted’s way and the wrong way.”

Brady and the Dynamics, Inc. team unloaded with a fast piece right from the get-go, first by recording the best lap during Wednesday night’s open practice. Starting sixth in the 30-lap feature, Brady wasted little time in showing that they were up to the task.

Methodically marching up through the field one-by-one, Brady picked off one spot per lap throughout the first five circuits. On the fifth lap, Bacon used a drive to wedge a path into the lead entering turn three in front of Robert Ballou. However, Ballou defied the change of position for a moment as he turned down underneath Bacon to regain the position.

Bacon’s second try became the second verse, different from the first, as he roared past on the back straightaway on lap six to take over, retain and maintain the lead from there on out.

With the lap count dwindling to six laps remaining, Bacon controlled the remote, dialing up a 3.609 second lead over second-running Max Adams, who was in the midst of his best career USAC National Sprint Car run.

But things can change in a hurry as evidenced by fourth place Jake Swanson who tagged the outside wall with his right rear tire in turn four, which sent him into a spin-cycle, airborne 360. Swanson’s car was straightened out only due to the fifth-running car of Justin Grant who hit the front left of Swanson’s car squarely. Back on the gas, Swanson found himself as a passenger with the front end knocked out, thus sending him on a beeline to the left that stopped him in his tracks about a foot from the inside front straightaway wall. Nonetheless, the 2021 “Ovals” opening night winner’s victory defense was finished while Grant continued on.

Once more, Bacon scooted away on the lap 26 restart over Adams. Meanwhile, Ballou and Grant exchanged a bevy of sliders in a duel for third with Ballou escaping back into the spot just prior to the yellow flag for Kyle Edwards (21st) who climbed the turn four wall, knocking him out of the contest.

Adams subsequently slipped above the cushion in turn two on the lap 28 restart, handing over two pieces of real estate to Ballou and Grant who promptly zoomed past. Grant surpassed Ballou for second at the entry to turn three with the white flag being waved just ahead on the horizon. Meanwhile, Leary streamed a path past Adams along the inside berm in turns three and four to gain fifth.

Just then, Brody Roa (6th) whipped against the turn four wall and was subjected to a similar fate as Swanson just a handful of laps earlier with Roa pirouetting along the outside wall before beaching his front wheels atop the turn four concrete, forcing yet another in a barrage of restarts that Brady was forced to endure down the stretch.

“I was getting nervous with all those restarts at the end,” Brady relayed. “I just felt like something was going to happen – a tire going down or me messing up on the start and opening the door for somebody to slide me. But luckily, that didn’t happen.”

Foreshadowing, Bacon hit the “Esc” key to distance himself from the fray without another obstruction in his path during the green-white-checkered finish which sent the four-time USAC National Sprint Car driving champion to another Perris victory while closing the gap on his deficit in the championship race from 83 points to 76 behind Grant who grabbed runner-up honors 0.959 sec. behind Bacon at the line.

“Anything’s still possible with the points as well, but that would require some misfortune from some other people,” Bacon stated, regarding the final two races of the year this weekend. “I’d never wish that on anybody, but we’ll just try to do the best we can, and if something like that were to happen, we would be in a position to capitalize.”

In fact, the top-four in USAC National Sprint Car points ran first, second, third and fourth. Leary rounded out the podium in third while Ballou landed fourth. Reigning Oval Nationals champion Kevin Thomas Jr. mounted an excellent charge from 13th to fifth to round out the top-five.

Justin Grant (Ione, Calif.) made a superb late-race bolt to the forefront of the field, advancing from fifth to second over the final seven laps to finish in the runner-up spot in his TOPP Motorsports/NOS Energy Drink – MPV Express – TOPP Industries/Maxim/Kistler Chevy, and now stands on the cusp of what we hopes is a first career series championship with just two races remaining.

During Fatheadz Eyewear qualifying, Leary moved into sole possession of fifth all-time in terms of career fast qualifying times with the USAC National Sprint Cars. The 40th of Leary’s career moved him into sole possession of fifth all-time ahead of five-time series titlist Levi Jones. Furthermore, his 11 quick times in 2022 are the third most in a single season, equaling his own mark in 2019 and trailing only Kevin Thomas Jr.’s 15 in 2018 and Tom Bigelow’s 14 in 1978.