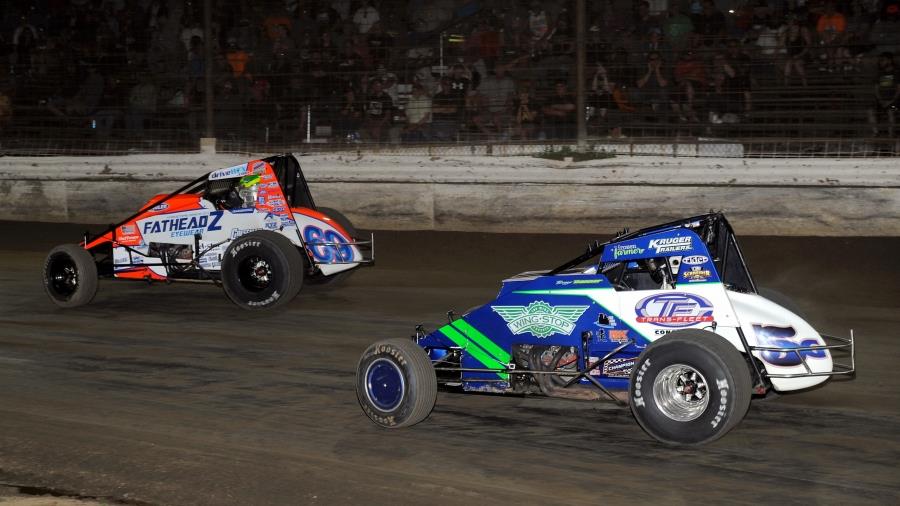 The Broken Arrow, Okla. native did exactly that on Tuesday night during the $6,000-to-win Jesse Hockett Classic USAC Eastern Storm opener by leading all 40 laps in nearly wire-to-wire fashion, with the exception of a brief moment when upstart Briggs Danner edged ahead just before the halfway point.

Bacon’s third series win of the year was also his 43rd career USAC National Sprint Car feature victory, which moved him ahead of 1974 and 1976 series champion Pancho Carter and into sole possession of 6th on the all-time list, which also vaulted him from fourth to second in the overall series standings as he pursues his fifth career title aboard the Dynamics, Inc./Fatheadz Eyewear – Gressman Sanitation – DriveWFX.com/Triple X/Rider Chevy.

“I knew we had a good shot starting up front, and I just had to not mess up,” Bacon explained. “I did mess up a couple of times, but, luckily, not bad enough for him to get by us.”

Bacon started from the outside of the front row and quickly established the point as he shot by pole sitter Jadon Rogers on the opening circuit of the 40-lap main event. Danner came right along in Bacon’s wake on the outside from the fourth starting position and pulled right to the rear bumper of Bacon.

On the 14th lap, Bacon began to encounter the tail end of the field. Nineteenth-place running Alex Banales occupied the middle groove entering the first turn. Bacon opted to drive underneath Banales, slightly knocking Bacon out of his rhythmic procession. Meanwhile, Danner chose to take the high road, and it very nearly paid off.

Danner pulled ahead of Bacon by a full car length off the exit of turn two but, midway down the back straight, Danner swung just a bit too wide and slapped his right rear tire, then the right front, against the outside concrete wall. That promptly delivered the race lead on a platter right back to Bacon who gladly accepted and raced away back to a three to four car gap between he and Danner.

“Briggs definitely pressured us there,” Bacon recalled. “I thought we were going to be pretty good out there in clean air, but he poked his nose in there a couple times. I had to get my elbows up a little bit more.”

The first stoppage of the evening came in turn four on lap 21 when 16th running Shane Cottle slowed just moments after Bacon slid past him to put him a lap down. Cottle ultimately came to a stop on the front straightaway to bring out the yellow flag with the race halfway complete – 20 down, 20 to go.

With a clear, open road up ahead of him now, Bacon had no traffic to negotiate and simply had to pedal it to keep Danner, the youthful USAC East Coast Sprint Car point leader, at an arm’s length distance, doing so admirably as he constructed a half-straightaway lead during the ensuing laps, which reached to more than a full second interval despite having to muscle his machine with all his might around the track.

“I thought, eventually, the top would go away, and we’d go back down to driving across the bottom, but it never did,” Bacon revealed. “I was waiting on that, and it never happened, so I had to keep my elbows up longer than we usually have to here.”

Fourth-running Logan Seavey encountered trouble on lap 28 when he slowed with a flat right front tire, which forced the second yellow flag of the feature and relegated Seavey back to 13th in the final running order after returning from the Indy Metal Finishing Work Area.

That issued Bacon another restart and another opportunity for Danner to pounce from 2nd, but for Bacon, on any track surface he’s been presented with over the years, and in any curves thrown his way, Bacon has proven to excel at any situation that arises.

“We were pretty tight, and we we’re set up for this place to go glass slick from top to bottom,” Bacon noted. “That little lip (in turn one) was giving us a little bit of trouble. I kind of had to cheat it on entry and, for the one in the center after the restarts, when my tires were low, I had to manhandle it a little bit; it was bucking around a little bit. Once we got the air up and our tires hot again, after a few laps, we were able to get through it all right.”

One last final restart with 13 laps remaining resulted in the same postscript for Bacon as he distanced himself from Danner down the stretch and chalked up yet another feature victory in his illustrious career by a 1.442 second margin over Danner, Chase Stockon, Justin Grant and Robert Ballou.

Briggs Danner, the impressive young driver from Allentown, Pa., turned in his most impressive performance yet by scoring a career-best USAC National Sprint Car finish with a runner-up result in his Heffner Racing Enterprises South/E. Schneider & Sons Recycling – Wingstop/Triple X/Rider Chevy. To the roar of the crowd, the popular home state driver came up just one spot short becoming the first Pennsylvania to win a USAC National Sprint Car feature since Frankie Kerr in 1999 at the Terre Haute (Ind.) Action Track.

“I really had my hopes up in the beginning,” Danner admitted. “I think we were a little tight once it started to slick off to the curb. Brady’s got a couple more laps than I do, so this is like a win for us here. Starting up front helped, but I started making a few mistakes there at the end. Nobody showed me a nose, so I can’t complain.”

“Those two (Bacon and Danner) were out there on their own and we were just maintaining there,” Stockon recalled. “I was kind of glad the race was over. At the end, we were hanging on for dear life, it felt like.”

What a comeback effort it was for both Emerson Axsom (Franklin, Ind.) and his Clauson Marshall Newman Racing team. After a vicious bit of wall contact and flip in his heat race, which also involved Robert Ballou, Axsom’s team utilized a backup car for the feature. Axsom started 20th and raced to a 10th place finish to become the night's hardest charger at +10 in his Driven2SaveLives – ZMax Race Products/Spike/Kistler Chevy.