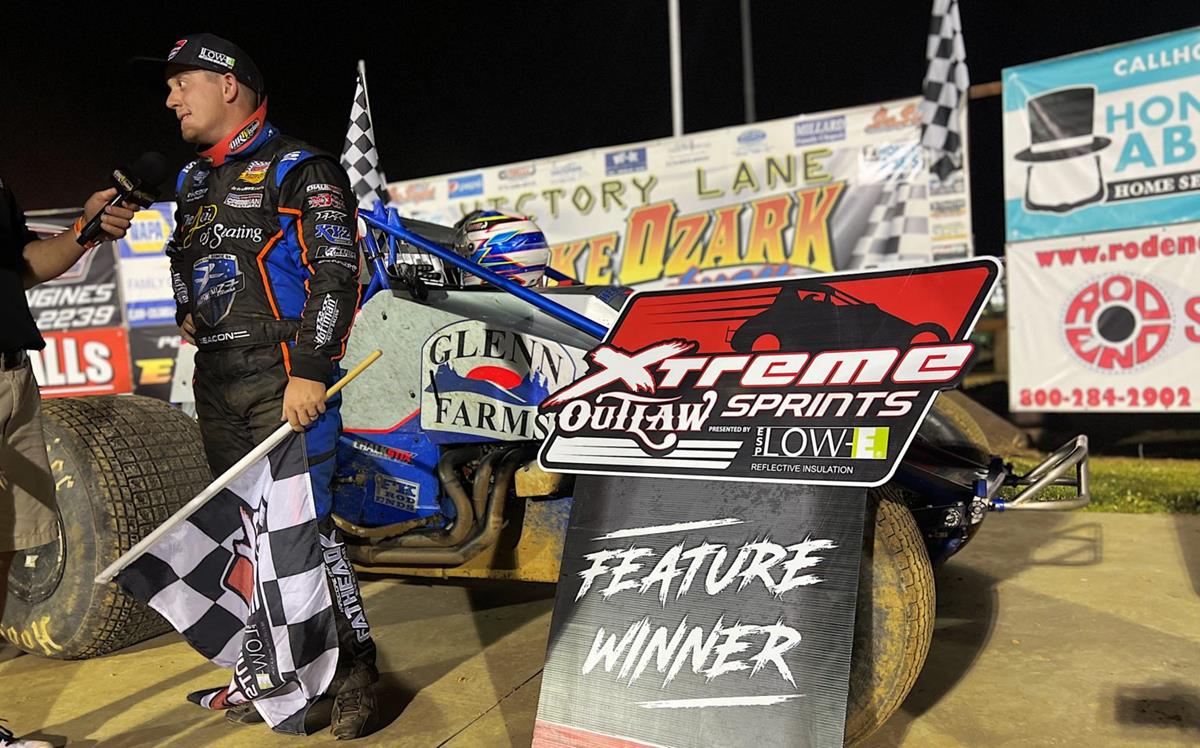 “The Macho Man” rolled from seventh as the green flag waved at the Eldon, MO track and quickly picked his way into the top-five. From there, it was a methodical line on the low side that allowed the #98 entry to drive by the trio of Matt Westfall, Robert Ballou, and eventually leader Jake Swanson on the 16th of 30 laps.

The Broken Arrow, OK native survived a pair of restarts, one with a hard-charging CJ Leary on his tail, to get the job done and take down Saturday’s $6,000 top prize. He had a chance at a potential $16,000 payday at Lake Ozark – needing another win in the POWRi 410 Winged Feature – but fell short of the Design Source Flooring sweep bonus with a second-place run following his non-wing win.

It’s been a rollercoaster ride to Xtreme Outlaw victory lane for the four-time USAC National Sprint Car Series champion, who has been a threat to win in each of the four races in 2022. He was high point man before a violent flip on night one, then finished a close second-place on night two, and was leading the third event before spinning from command.

However, tonight, “The Baconator” was not to be denied. He controlled the final 15 laps of the Low-E Insulation Feature and snagged his third overall win of the season in the process. Behind him, the dramatics did not disappoint.

A part of Bacon’s drive to the lead was Jake Swanson’s unfortunate luck as his right rear tire began to delaminate. Things only heated up on Lap 24 when Robert Ballou made contact with Swanson’s #21AZ in turn three and moved him out of the way for position. The tide quickly turned in the next corner Swanson returned the favor to Ballou, bringing both cars to a stop, and taking away two winning contenders.

CJ Leary, the hard-charging championship leader, was placed into second-from-13th following the wreck and appeared to be Bacon’s biggest threat for the Lake Ozark glory. The Greenfield, IN native was searching for his third Xtreme Outlaw win in four races but ultimately fell short after providing a brief bid against Bacon on the final restart.

Ultimately, Matt Westfall of Pleasant Hill, OH earned the runner-up finish as he snuck by Leary after a close encounter with the wall. For Westfall, it continues his success at Lake Ozark as he follows a fourth in April with a second in June to up his Xtreme Outlaw career-best result.

Leary officially brought the Bill Michael Motorsports #77M home with a third-from-13th effort and extended his Xtreme Outlaw championship advantage due to Ballou’s misfortune. To start the inaugural season with the new Series, Leary has finished first, fourth, first, and third as the most consistent car on tour.

Shane Cockrum rallied from a work area trip early on and unofficially drove the Amati Racing #66 all the way from 18th-to-fourth. His stellar rally from the tail brings the Benton, IL native up to second in the Xtreme Outlaw standings with only eight races remaining in pursuit of the inaugural $20,000 title. Alex Bright, who made the long haul from Collegeville, PA, earned his first Xtreme Outlaw top-five finish.

Rounding out the top-10 at Lake Ozark was Kory Schudy of Springfield, MO in sixth-from-14th, Jack Wagner of Lone Jack, MO in seventh-from-17th, Mario Clouser of Auburn, IL in eighth after a trip to the work area, Anthony Nicholson of Bartlett, TN in ninth-from-20th, and Steven Russell of Rochester, IL with TJ Forged Hard Charger Honors for his 22nd-to-1oth run.

UP NEXT – The Xtreme Outlaw Sprint Car Series presented by Low-E Insulation returns to racing in two weeks with the St. Louis Firecracker Faceoff on Friday and Saturday, June 24-25. The Series will join the World of Outlaws CASE Construction Equipment Late Model Series and Summit Racing DIRTcar Summer Nationals for the two-night affair at Federated Auto Parts Raceway at I-55 in Pevely, MO. Fans can BUY TICKETS HERE or watch LIVE on DIRTVision.