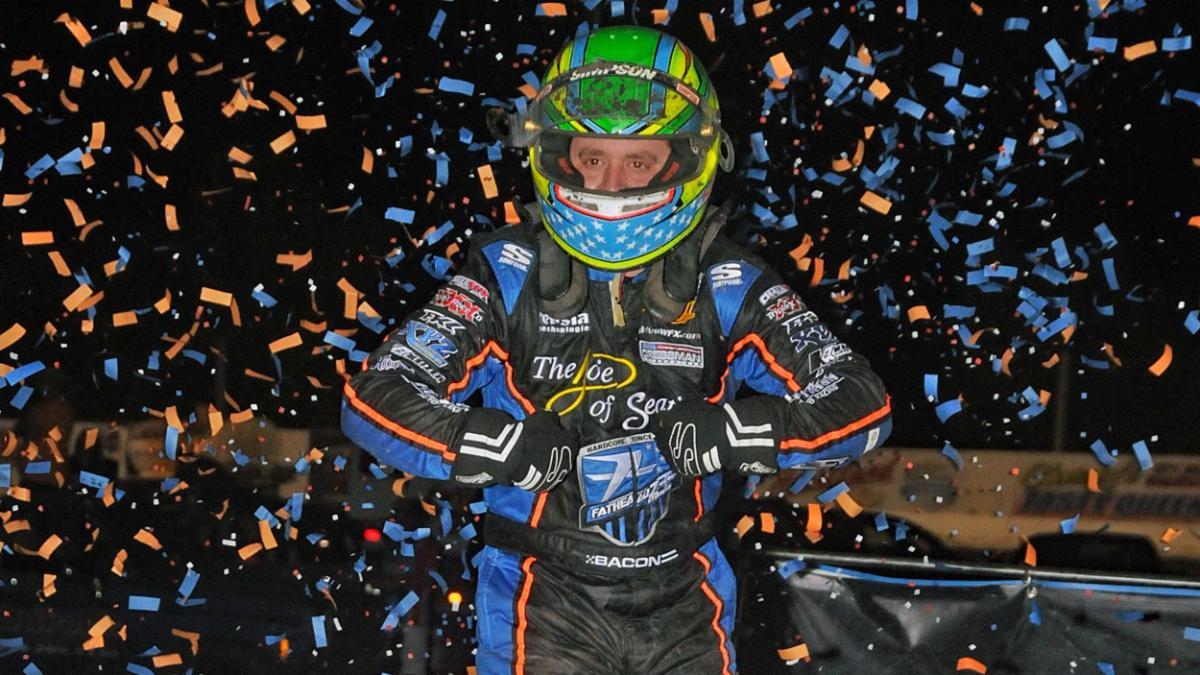 WORTH THE WAIT: IT’S A BACK-TO-BACK BACON BEAT DOWN AT LAKESIDE

Kansas City, Kansas (May 12, 2022)………With the havoc that Mother Nature had been playing on the USAC AMSOIL Sprint Car National Championship of late, it nearly seemed as if it had been five years since the series last completed a feature event.

While, in reality, just a tick less than a month ago had passed by since the last feature was completed, and it just so happened to be five years since the series had last competed at Kansas City, Kansas’ Lakeside Speedway.

Either way – one month or five years – the song remained the same with Brady Bacon backing up his victory with yet another. The Broken Arrow, Okla. driver entered Thursday night’s event as the most recent victor at the 4/10-mile dirt oval in 2017 and had also captured the most recent round contested at Ohio’s Atomic Speedway in mid-April.

The four-time series champion spent little time doddling on this evening’s co-sanctioned race with the USAC Wholesale Batteries Midwest Wingless Racing Association as he sprinted to the front from his fifth starting position by lap four and produced a K.C. Masterpiece of a drive with a drubbing of the 22-car field throughout the 30-lap main event, piloting his Dynamics, Inc./Fatheadz Eyewear – Gressman Sanitation – DriveWFX.com – Tel-Star/Triple X/Rider Chevy to a 4.595 second margin of victory.

His 42nd career series score was yet another in his succession of successes, as he rose to a tie for sixth on the all-time USAC National Sprint Car win list alongside Pancho Carter while surpassing Bryan Clauson in that department.

Bacon knows victory all too well at Lakeside, winning a TNT Sprint Bandits feature as far back as 2009 in KCK before winning once more in 2017 and again on Thursday night, which reminded him of the old times when he was a budding teenager just beginning to make his mark on the sport. As a now established veteran and champ, the good times are the same as it ever was.

“The track was more like it was 13 years ago when we used to run here and had a lot of success,” Bacon compared. “The banking has changed a little bit and it was spotty in the past like it was tonight. I knew if I could get my car to roll around the bottom, it’d be pretty hard for the top to be as fast. It kind of shelves off on exit.

(Turns) three and four had me scared,” Bacon continued. “I didn’t know how slow I was getting in lapped traffic. They had all my lanes taken up and I didn’t feel good enough on the bottom. I was hoping I could keep enough speed up to keep everybody at bay. I felt really, really good in one and two on the bottom and, luckily, I found it on the first lap and just stuck to it from then on.”

Pole sitter and series point leader Emerson Axsom took the top to surge to the lead on the opening circuit, but inside second row starter C.J. Leary skimmed the bottom to ride to the lead between turns one and two on lap two. Bacon briefly swung to the outside of Leary on the opposite end in three and four, trailing at the stripe by a single car length at the conclusion of lap two before ducking back to the bottom entering the first turn.

Bacon was committed to the bottom now and clung to it down the back straightaway and into the third turn on lap three. The trio entered the corner three abreast with Bacon down low, Leary to the middle and Axsom up on the high line and carrying the momentum to beat Bacon to the line by a half car length.

Axsom’s resurgence to the lead was brief as Bacon launched off turn two on the fourth go-around to rip past Axsom and, for all intents and purposes, put a lock on the remainder of the feature as he continuously grew his lead throughout the balance of the A, sticking to his guns all the way home.

“The bottom was my bread and butter, and I didn’t think it was going to last the whole race, so I wanted to make hay while the sun was shining, I guess, and make sure that I passed any cars on the bottom that I needed to while it was still there, but fortunately, in one and two, it stayed there the whole race.”

Thursday’s Lakeside event was the inaugural race of the Bubby Jones Master of Going Faster mini-series for the USAC AMSOIL Sprint Car National Championship, which will pay $5,000 to the overall points champion for the 10-race series within a series.