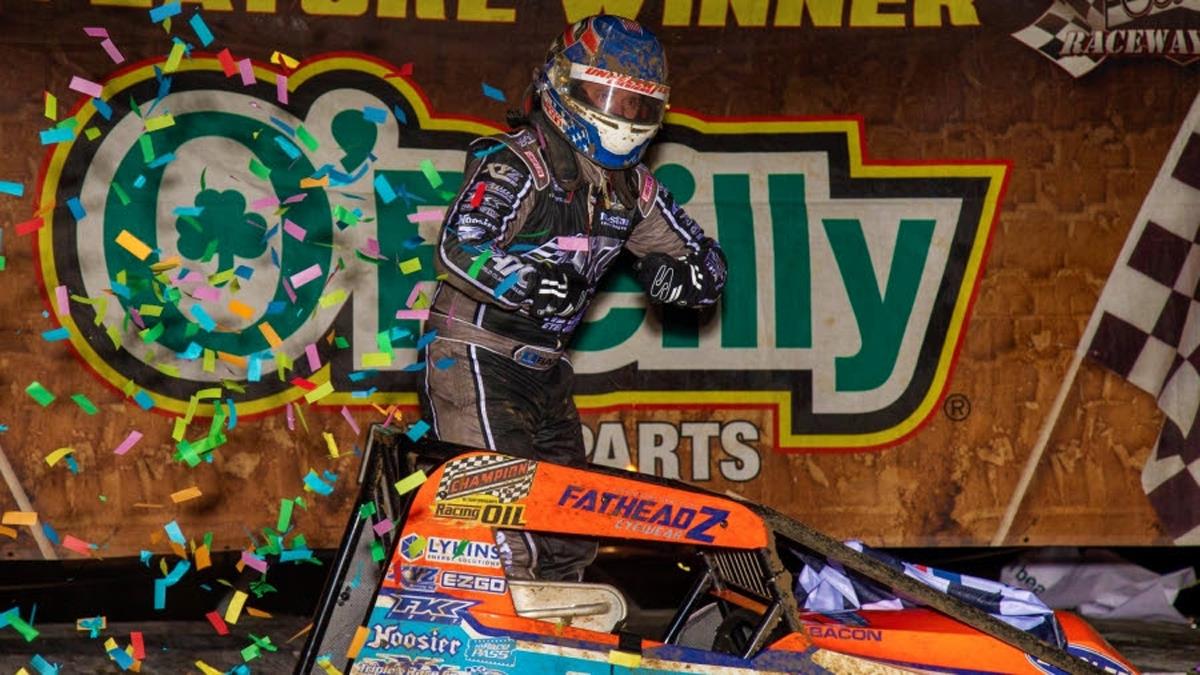 Apart from those first two titles, where the Broken Arrow, Okla. native was solidified first and foremost as a wheelman by trade, in 2020, Bacon took a more hands-on approach to the proceedings from the ground-up, from the construction of the cars, to the fine-tuning throughout the season to extend the Dynamics, Inc. team's record of series entrant championships to 12 alongside crewman D.J. Lebow and 2020 USAC Chief Mechanic of the Year, Matt Hummel.

"This one was a little different," Bacon acknowledges. "We have a little more responsibility with the team now, so it's a little more gratifying than the first two. We house the cars and everything at my shop in Union City, Ohio. D.J. and I work throughout the week whereas, on the other two that I won, I just showed up with my helmet bag and talked to the team about setups and stuff, but now we do it all in-house."

"We took a lot of pride in the cars we built this year," Bacon continued. "We made some changes for the tracks we struggled at, and we performed well at those tracks, which was the difference in winning the championship. I'm really proud to get Hoffman their 12th and my third. It was an up-and-down year, so to end it on high note was very exciting."

Bacon's 2020 highlight reel included a repeat victory of the $20,000 Brandt Corn Belt Nationals at Iowa's Knoxville Raceway, a pair of wins at Lincoln Park Speedway in Putnamville, Ind. and a season-ending Fall Nationals score at Lawrenceburg (Ind.) Speedway, the final of their season-leading six feature triumphs.

But it was winning the opening two nights of the season in February at Bubba Raceway Park, a two-night sweep of Winter Dirt Games, that set the tone and served as a harbinger of things to come. The signal was clear after performances in recent years at Ocala that were described by Bacon as "terrible." Bacon and team had seemingly strengthened their weaknesses and were a top-five threat, at worst, on any given night.

Shortly thereafter, the COVID-19 pandemic hit, shutting operations down worldwide for much of everybody in all walks of life, including USAC racing. However, while three-plus months passed by, the next task on Bacon's itinerary wasn't getting back behind the wheel, it was his debut as a race promoter - a pair of USAC NOS Energy Drink National Midget events in late May in his home state of Oklahoma, which signaled a return to racing for the first time in a relative eternity.

The inaugural two-night event proved to be a rousing success, and from there, once it was time to get back in the driver's seat, the success naturally translated to the cockpit, sending Bacon on his path toward the championship and subsequently rose him up the ranks of the USAC National Sprint Car division's all-time leaderboards.

His 358 series starts rank 10th all-time while his 35 feature wins also place him 10th, equaled with Rich Vogler and Jon Stanbrough. Bacon has never been a so-called "stat watcher," but once his name began appearing amid the top echelon of drivers from throughout the past six-and-a-half decades of the series, he admitted that it has started to hit him as he's taken a peek of the lists of late, although there is still much work to do and many goals left to achieve and accomplish in his career.

"I never really did until we started creeping up the win list," Bacon said. "To see the names you're beside or surpassed and the ones you're catching up to, it's pretty cool. I'm about to turn 31 and by no means do I feel like I'm close to the end of my career, so I feel like I can win a lot more races. Obviously, we'd like to be at the top of the list and win the most championships, but I don't really look that far ahead. I'm just trying to prepare for each season as best as we can and make any improvements we think we need to make.

Now a man of multiple hats on both sides of the racing equation, Bacon looks forward to promoting events that are meaningful to him, not only in his racing life, but also in his personal life, such as Port City, where he honed his racing craft as a young man and a venue which returns to the Midget schedule in 2021 on April 9-10. But what made the highly successful driver in the prime of his career decide to put "race promoter" on his resume?

"I'd been thinking about it and talking with (wife) Xia Xianna for a while," Bacon said. "I didn't want to do something just normal. I wanted it to be a special event. With Mike & Meghan (Eubanks) buying the track, and running it, it just kind of all fell into place. We worked really hard to make that first one work, and we're working really hard to make the second one even bigger. Everyone had a good time, and the racing was phenomenal. We thought we could do it if we just worked as hard as we do at everything else. The first one seemed to prove that, and we're hoping to replicate that success in 2021."

In addition to Port City, Bacon's promotional efforts have extended to the USAC Silver Crown Series and to another location and place that has been the setting of some of the most major occurrences in his life, including his first career USAC AMSOIL National Sprint Car feature win in 2008, the same day in which he also met his future significant other.

"We've also added a Silver Crown race at Winchester," Bacon noted of the Sunday, May 9, 2021 series debut on the paved high banks of the eastern Indiana paved track. "Winchester is also a special track to us. Winchester changed my life; I met my wife there and we now live in Winchester, so I think that makes it more gratifying that the places we have these races at also have a special place in my life."

With Winchester sporting a paved surface, that removes one item of stress away from the equation for Bacon, who has sought out other avenues to bring value and entertainment to drivers and teams at the event.

"It'll be interesting to see how things at Winchester go," Bacon pondered. "My number one priority at Port City was to stay on top of track prep to make sure the racing was good. Winchester is what it is. It's exciting to watch cars go around there, period. I'm just trying to find ways to use my time that I'm not spending on the track to make the race more enjoyable for the fans and competitors. We've got some cool ideas and I'm looking forward to it."

Although he's not ready to hang up the helmet and firesuit any time soon, Bacon compared the feeling of reward and accomplishment between promoting a successful race and winning a race as a driver.

"It's a little different," Bacon said when comparing promoting to driving. "(Promoting) is a lot more stretched out, obviously. You're working the whole night. I don't think I really underestimated it, but it confirmed how much work it is if you really want to do it right and staying up with the racetrack. It's a different feeling, but during the night at Port City, I was never thinking I should be in a car. I'm glad I didn't try to race and promote at the same time. I think both would suffer. That'll pretty much limit our promotional endeavors for the next few years, hopefully, because I don't want to promote and compete at the same time."

"I don't see a reason why we couldn't," Bacon said point blank. "We've kept our program the same over the last few years, which I think has helped us to fine-tune everything since I first got back in my own car, when it was the No. 99. You think you have everything the same, of what you think is going to work, and it took a long time to find those little details that might've been different or needed to be changed. We've just nicked away at those things and tried to perfect everything. I feel like we've gotten better and faster every year, and hopefully we'll better and faster again in 2021."