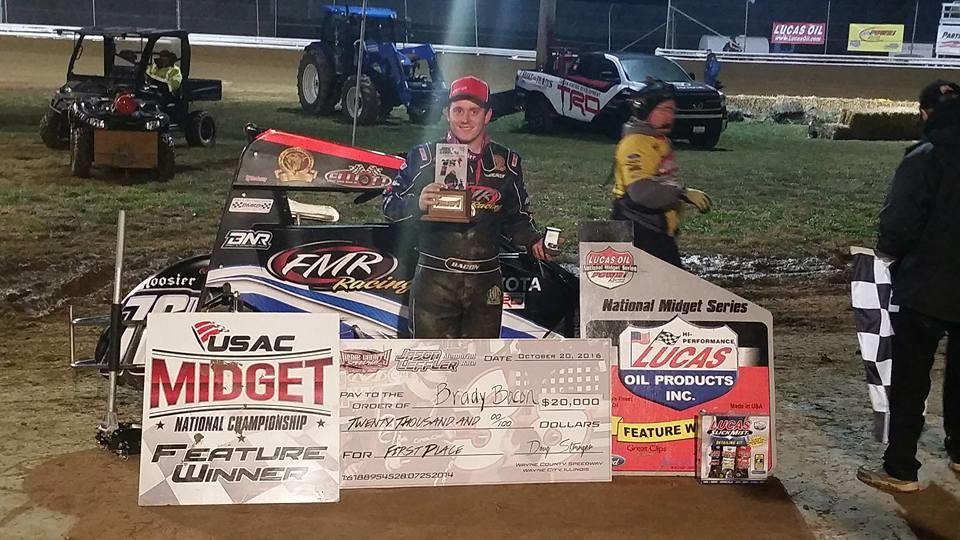 (Bill W) October 25, 2016 – Brady Bacon and the Frank Manafort Racing #76M midget team had been knocking on the door for their first win, and it came at a great time. The Broken Arrow, Oklahoma driver topped a stellar USAC/POWRi field, bringing home the $20,000 Jason Leffler Memorial at Wayne County Speedway in Wayne City, Illinois Friday. Saturday, he checked in with the World of Outlaws at Salina Highbanks Speedway in Oklahoma, charging from tenth to finish sixth. This weekend will see him back with the WoO at the World Finals at The Dirt Track in Charlotte, North Carolina.

Brady started third in his midget heat Friday. “We were able to win the heat,” he says. “We started sixth in the Qualifier and finished third. So we felt good, because we were moving up amongst some good cars. The track had a lot of rain, so the track got rough. It was around the bottom, and you had to go up top to pass cars if you were really good. It was hard to keep the front end going the right direction. To pass the cars we did, you had to move up, get through the holes and get your momentum up for a few laps. We had a car that was able to do that, and most didn’t.”

He started outside row one for the main event. “Chris Windom led six or seven laps,” says Brady. “At that point, we were able to get by him, but the yellow came out. We restarted second, and I think it took three or four laps to get back around him. From there, we were able to hold a decent lead. We had several yellows. As we were catching lapped traffic, another one would come out. They came out at pretty good times for me, because traffic was going to be tricky.”

Brady holds a lot of respect for the late Jason Leffler. “He left USAC before I got in, so I didn’t know him there,” he says. “I did get a chance to talk to him, mostly when he came back and ran sprint cars. I’m very familiar with his accomplishments. Bob East is our crew chief. He said the last time he won a $20,000 race was with Jason Leffler at 16th Street Speedway at Summer Sizzle. They had had similar issues as us before that race. They would have a good car and wreck or have other issues. So that was kind of cool.”

Brady timed in tenth quick with the Outlaws on the Salina Highbanks. “Timewise, we were where we needed to be,” he says. “One-tenth of a second would have made seven spots of difference. My car wasn’t perfect, and I didn’t make perfect laps. That’s kind of the result of not running with the Outlaws enough. That’s frustrating for me, but at the same time, we had a good car all night. Gray Motorsports has built an engine that has helped my program quite a bit.”

After finishing fourth in his heat, he would line up tenth for the feature. “The track slickened a bit in the feature and built a couple of grooves,” says Brady. “That’s when we were able to move forward. I think we fell back a couple spots in the beginning and we started coming back and picking them off. We were able to get up to sixth, and passed a lot of good guys (including Donny Schatz, Brad Sweet and Joey Saldana) to get there.”

Brady says the secret to moving up was getting a run on the low side of one and two. “We were able to move around the track a little bit more than others,” he says. “We did have some mechanical issues at the end of the race, but fortunately, it worked out that we were able to maintain sixth on the last restart.”

He is excited about this weekend’s World Finals. “I’m looking forward to going to see the Gray Motorsports shop while I’m there,” says Brady. “We’ve got a chance down there. We have a good car right now, and that race is usually a little unpredictable.”

Wilwood Engineering designs and manufactures high-performance disc brake systems. Since the company’s inception in 1977 by Bill Wood, we have developed a substantial matrix of brake components and engineering techniques that allow us to quickly and reliably create brake systems for almost any application. Our core ability is the rapid development of custom engineered brake systems using a combination of off-the-shelf and custom components. In addition to designing and manufacturing brakes for all types of competitive motor sports, Wilwood also manufactures brake systems and components for agricultural equipment, industrial applications, utility vehicles, snowmobiles, quads, motorcycles and military vehicles.