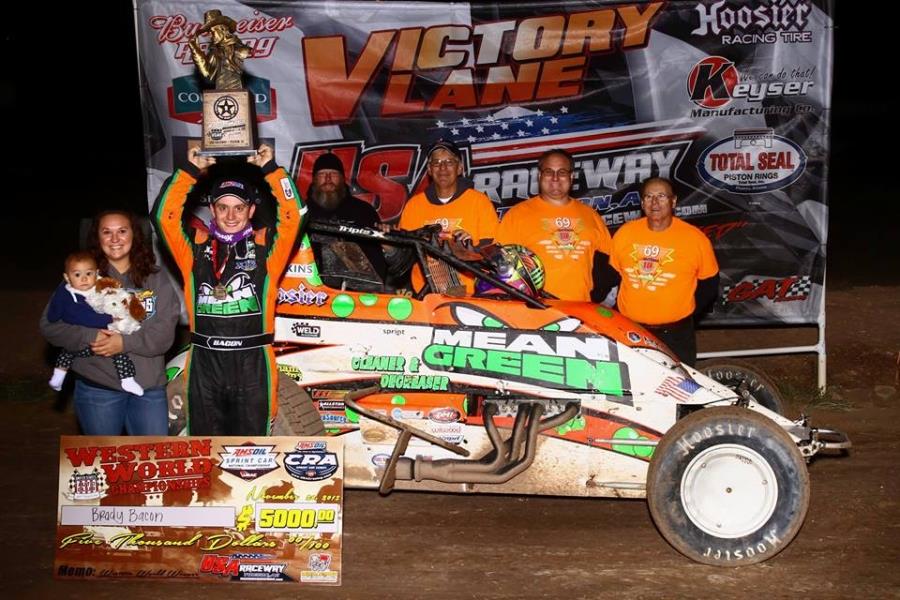 (Bill W) November 25, 2015 – Brady Bacon registered a win last Friday night at the Western World USAC event at USA Raceway near Tucson, Arizona. The win was #100 for the Hoffman Racing #69 team. The Broken Arrow, Oklahoma driver was busy all weekend, registering a total of five podium finishes in the six features he took part in. Tomorrow night, he will be aboard Frank Manafort’s midget at Perris Auto Speedway’s 75th Annual Turkey Night.

The Western World was a three-night event starting on Thursday. Brady competed in both the USAC National Sprint Car Series with the Hoffman’s and the USAC West Coast sprints (360) aboard Josh Ford’s #73x. “Tucson is one of my favorite tracks, especially without a wing,” he says. “So we went in with some high expectations. We were able to set quick time with the 410. On Thursday night, I kind of made mistakes in both features that cost me.”

It was a rocky start for Brady in the 360 feature, but he rebounded. “I fell back a couple of times in the 360 feature,” he says. “I was able to claw my way back up to second. We kind of salvaged a good finish in that one after not having a good start.”

He would finish third in his 410 heat and start the main event sixth. “I almost crashed at the start of the feature and got up on two wheels,” says Brady. “I fell back to tenth or eleventh. We were able to get back up to third before Jerry (Coons) crashed in lapped traffic. That put us in second. We really didn’t have a lot for (winner) Robert (Ballou) out in the open track.”

Friday saw a tougher night in the 360. “It was hard to pass in the heat and that put us in the B,” says Brady. “We started seventeenth in the A. We were able to get as high as third after a big crash on the front straight. I was out of tear-offs by then, and then I got sprayed by mud from the bottom. I went to the bottom and hoped I didn’t get passed by too many guys. We ended up sixth. That was disappointing, but it was still enough to lock us into Saturday.”

Brady timed in sixth quick in the #69 on Friday, and started third in the feature after getting through his heat. “We rode in third for a while, waiting for the track to come in a little bit,” he says. “We were able to get by Tracy (Hines) for second. It took a few laps to get by Matt Rossi for the lead. Once the bottom came in, we were pretty good. We actually went to the top of one and two later in the race. I knew Bryan Clauson was right there. We were able to keep the lead and not make any mistakes.”

The win was a historical one for the Hoffman’s. “It was pretty neat to get that 100th win for them,” says Brady. “Last year, we were able to get their tenth championship with USAC as well.”

Brady garnered enough points in both classes to lock himself into Saturday’s Dashes. “I wound up sixth in both revenge draws for the Dash,” he says. “We were able to get up to third in the 360. The track was changing really fast and we didn’t keep up quite well enough. We ended up fifth there.”

Starting third in the 360 feature, he would checker second. “They hadn’t reworked the track before the feature,” says Brady. “It was in decent shape, but it was one-lane around the top. I was able to get to second. I had a couple shots at the leader, but it was probably more of a chance at a crash than the lead. We couldn’t take too many risks, because there were four or five cars there in traffic.”

Brady would post in row three for the 410 finale on Saturday. “They tilled the top and bottom for the feature,” he says. “It took a while for the bottom to come in. I spent some time up there, and Bryan got by us on the bottom. The top got curby and hard to run after that. We went back to the bottom, but it was a little late. We ended up third. We were the same speed as the leader, but they had the jump and a couple of lapped cars between us. We just fell a couple of laps short of being where we needed to be.”

It was a great weekend for Brady and both teams. “We had a really good weekend,” he says. “Obviously, we’re pleased. We’d have liked to have had another win or two, but we made a little money heading into the winter.”

At Triple X Race Components, we don’t just build race parts – we race too. We know how expensive it is to race. That’s why we offer the most common Sprint Car, Midget, and 600 Mini Sprint parts. We keep our costs down by building thousands of each part. We build the parts that get damaged the most. With our discounted pricing, you can afford to race hard and race to win. All Triple X components are produced in our ISO 9001 certified factory. They are laboratory tested, race tested, and universally approved. Whether you are a new customer or a repeat customer, you can be assured that you’re buying race-proven products at great prices. We guarantee it. Triple X has established a large network of dealers coast to coast and internationally to serve your needs. Please stop by your local dealer and check out our newest products. Check Triple X Race Co. out on the web at www.XXXRaceCo.com!

Brown & Miller’s lightweight range of hose satisfies virtually every racing application and their fittings are designed for safety, reliability and optimum weight saving. With an industry standard ProGold convoluted hose system, Smoothbore hose and Adaptor ranges, they have the complete system. To further complement these products, they can also provide custom engineered fittings designed to optimize hose installations where standard fittings may not be suitable. With outlets worldwide, there is no excuse to settle for second best! At Brown and Miller Racing Solutions, they maintain the simple philosophy that when our parts are on your racecar, they are a part of your team. Visit them on the web at www.BMRS.net!