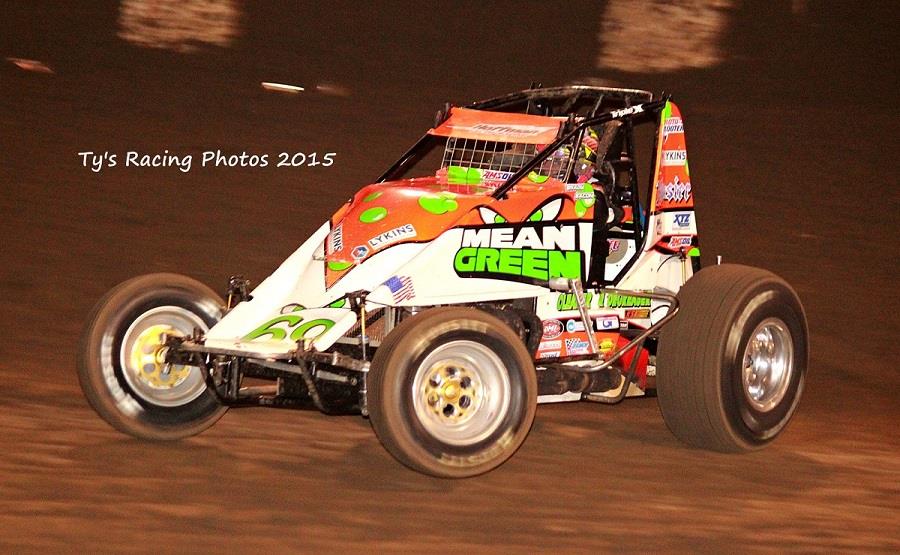 (Bill W) November 17, 2015 – A second place finish and two sixth place runs at the Oval Nationals at Perris Auto Speedway in Perris, California last weekend have Brady Bacon and the Hoffman Racing #69 team ready for this weekend. The USAC National Sprint Car Series will cap 2016 with three nights of racing at the USA Raceway near Tucson, Arizona this Thursday through Saturday night.

The Oval Nationals started Thursday and the Broken Arrow, Oklahoma driver timed in well. “We came out of the box well, qualifying second,” says Brady. “I think we came out a little late to get quick time. We struggled a bit in the heat and barely made the transfer (finishing fourth after starting sixth).”

Brady would start the feature in the third row. “In the feature, we kind of held our own,” he says. “We ended up finishing about where we started in fifth.”
He would time in seventh quick for Friday’s program. “We made some adjustments for Friday,” says Brady. “We didn’t qualify quite as well, but that ended up putting us in better position for the feature.”

Brady would start fifth in his heat. “We were good in the heat,” he says. “We had kind of a tough heat. We barely made it through again (finishing third), but that was kind of how the track was.”

He would start Friday’s main event on the pole. “We got beat on the start,” says Brady. “(Robert) Ballou got by me and we ran third for quite a while. We were just a little tight at the beginning. (Bryan) Clauson got by me and we fell back to fourth. On a late race restart, I was able to get back by Clauson and (Damion) Gardner before they had kind of a wreck behind me.”

Brady’s finishes locked him into Saturday’s Dash, where he would finish fifth. “We were fortunate to get back up there and finish second (Friday),” he says. “That put us second in points overall for Saturday.”

Starting fifth in the feature, the team went to work on the #69. “We didn’t think that the car we had was capable of winning the race,” says Brady. “We threw some stuff at it on Saturday, and it didn’t work out. It was kind of a gamble. The track was quite a bit different Saturday than what it had been the first two days. We wound up sixth. We felt like we had to do something different to win, and it didn’t work out. That’s part of it.”

The 2014 USAC sprint car champion is looking forward to this weekend. “We’re feeling really good about going into Tucson,” says Brady. “That’s always been one of my better tracks. Hopefully, things will work out for us and we can get a win or two.”

No matter the form of motorsports, ButlerBuilt’s leadership makes it the most successful seat in the industry! Champions in Butler Built Seats span all forms of motorsports from NASCAR Sprint Cup to late models, and of course, the open wheel world! Whether you race a stock car locally, you are traveling with a national series or you’re in the seat of a Monster Truck, Butler Built has the custom seat for your needs!

Butler Built does not stop at seats either. They offer a wide variety of safety products including Seat Accessories, Seat Options and Mounting, Padding, Belts and Restraints, Steering Wheels, Open Wheel Products, Air Management Systems, Lateral Head Supports, ARAI helmets and much more. Your safety is #1 with Butler Built!

To learn more about the Butler Advantage or if you have questions about your race safety, visit www.ButlerBuilt.net or call 800 621-SEAT (7328) today!