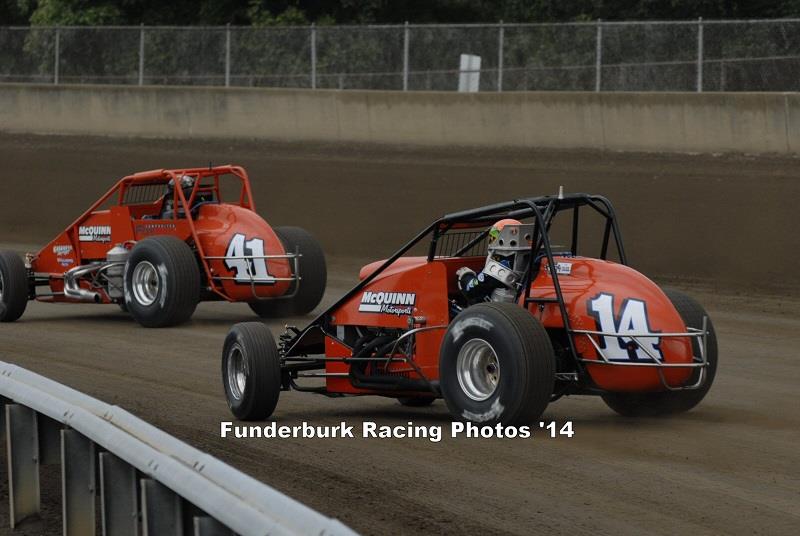 (Bill W) September 1, 2014 – Brady Bacon got a taste of Silver Crown Racing a few weeks back in Springfield, Illinois, but that event was washed out after qualifying. Sunday night, he drove from 12th to third in the “Ted Horn 100” on the “Magic Mile” in DuQuoin, Illinois aboard the McQuinn Motorsports #14. This Sunday, the Broken Arrow, Oklahoma driver will be back in the Silver Crown division at the makeup of the “Tony Bettenhausen 100” at the Illinois State Fairgrounds in Springfield.

Brady would qualify twelfth quick at DuQuoin. “We changed some things on the car to make me more comfortable,” he says. “The track was a lot different than Springfield had been. It had a big cushion, and you had to drive the car pretty hard to be fast. We weren’t really concerned about where we qualified. We were just trying to get it where the car would get around a little better.”

Early on, Brad got a feel for the big cars on the mile. “We rode around for a while,” he says. “I think the leaders were catching us. The car was really tight at the beginning of the race. They had a yellow, and we kept getting better and better. The fuel load came off and we were able to pass some cars.”

With seventy laps of the hundred scheduled, a little too much of the fuel load came off. “We were fifth, sixth or seventh around the halfway point,” says Brady. “We missed a wreck, and picked up several more spots. With thirty to go, we were in fourth. We started running out of fuel a bit in the center of the corners. The car was really good, but the fuel kept getting worse.”

Brady tried to hold on, and a late race caution gave him an opportunity. “With ten to go, I was just putting around the bottom trying to make it to the end,” he says. “I think we were sixth. There was less than five laps to go and we had a caution. I was able to come in and put fuel in. At that point, the (caution) laps weren’t counting. We had a green, white, checker and we were able to go from sixth to third. We had a really good car at the end when it was running. We were running the top, so I don’t think the car wanted to go that far on a tank of fuel.”

Last Tuesday Brady raced at the Jason Leffler Memorial with the POWRi midgets at Wayne County Speedway in Wayne City, Illinois. After finishing second in his heat and sixth in his qualifier, he would pull off early in the feature. “The track was rough and the car was bouncing really badly,” he says of the Scott Ronk #19. “You weren’t going to come from the back to the front. It was racy, but you were racing with the same guy the whole race. We were running in the back and it was bouncing ready to crash, so I pulled off.”

A rainout of the “Jim Hurtubise Classic” Friday at the Terre Haute Action Track will set up a fun week of racing for Brady in mid-September. Tuesday, September 16, the World of Outlaws will be at Kokomo Speedway in Indiana before moving down to Terre Haute on Wednesday. Thursday will be the makeup for the Hurtubise, and Brady will finish out the week at the 4-Crown at Eldora Speedway near Rossburg, Ohio that Saturday.

Lightning Wings are made by racers for racers. Each one is built to your car's specifications and is constructed from aircraft quality aluminum! Whether you drive a sprint car or mini-sprint, or need trailer accessories, choose Lightning Wings! Visit them online at www.LightningWings.com!