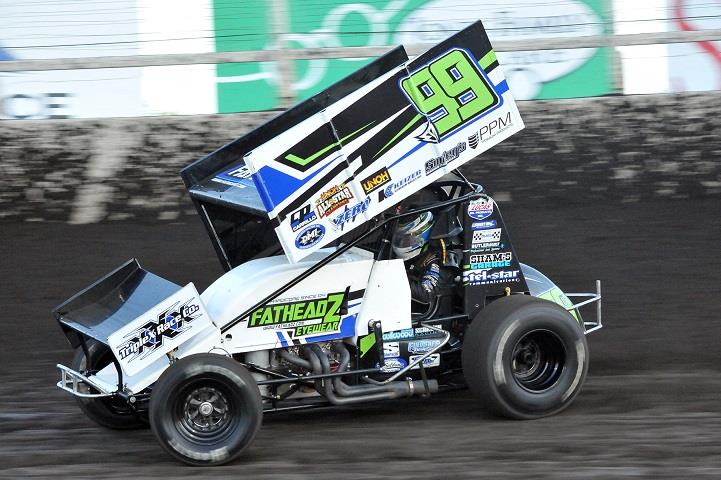 (Bill W) July 28, 2014 – A pair of podium finishes in some tough fields last weekend, has the Brady Bacon Racing #99 team ready for the 360 Nationals. The Broken Arrow, Oklahoma driver registered a third place finish in the Illinois Speedweek opener at Highland Speedway Wednesday, and a third place finish with the All Stars at Huset’s Speedway near Brandon, South Dakota Sunday night. He will qualify Thursday for the 360 Nationals Saturday night, and compete at the 410 “Capitani Classic” at Knoxville on Sunday.

The tight Highland bullring saw a good draw for Brady amongst the 31-car MOWA field last Wednesday. “We were fortunate to draw the pole of the heat,” he says. “It was pretty tough to pass, so that was good that we could get the win.”

The win put Brady in a Dash where he would start and finish fifth. “It was slick by that point, and it was hard to make up ground with such good cars up front,” he says. “I tried some things and it didn’t really work. I thought the middle would come in, but it didn’t.”

Starting inside row three for the main event, he would move up right away. “We were able to get to fourth pretty quickly,” says Brady. “We were running behind (Danny) Lasoski and (Jimmy Hurley). They were racing each other, and Hurley got into the wall. That put us into third, and we were riding behind Lasoski, we just couldn’t do anything with him. The track leveled off towards the end of the race and everyone was the same speed. It was a good night, and we kept our nose clean, which wasn’t easy to do there.”

The third place finish preceded a trip to Tri-City Speedway near Granite City, Illinois Thursday. Brady picked up a win with MOWA there earlier this season, but a heat race crash ended his night early this time. “There just wasn’t much of a cushion,” he says. “Normally, there is there. I had gotten up to third and had actually passed Terry (McCarl) at one point for second. I just got up a little too high. It flattens at the top of the track. I slid into the cushion, hit the wall and turned over. Unfortunately, Christopher (Bell) slid into me. It didn’t cause us a whole lot of damage, it was just a pain to fix. So we didn’t make it out. It could have been a whole lot worse.”

After getting rained out at Jacksonville Speedway on Friday, the team headed north at west to the Knoxville Raceway in Iowa on Saturday to test and tune the 410. Suffering a tough qualifying lap, Brady missed the A main despite moving forward in both his heat and the B. “We wanted to come there and see where we stacked up,” he says. “It’s going to be tough (Knoxville Nationals). We definitely have some work to do. I think there were around 40 cars there, and 35 good ones. My car wasn’t really balanced well, and it doesn’t take much to be a long ways off at Knoxville.”

Sunday’s event at Huset’s with the All Stars started well. “Qualifying sixth really didn’t help us, because it put us in the second row, and they take the top two in the heats to the Dash,” says Brady. “We were fortunate to get a good start in the heat though, and got to second.”

Brady drew a starting spot outside of row one for the Dash. “We almost beat Rico (Abreu) on the start, but we settled into second,” he says. “We were able to move around there, and we got ready for the feature.”

He would lead early in the feature. “We slid Rico in three and four to take the lead,” says Brady. “I think we led for eight or ten laps, and then we got to lapped traffic and got hung up behind one guy. Rico and (Mark) Dobmeier got by me right before the yellow came out.”

Brady settled for third at the checkers. “We were probably not quite as good as Rico, but I think we had a better car than Dobmeier,” he says. “The track was around the top, and it was just hard to pass. We were definitely happy to be there and have that good run our first time ever there. It was good after struggling at Knoxville.”

Hoosier Tire Southwest is located in beautiful Balch Springs, Texas. They can be reached at 1-972-289-RACE (7223). Call them if you have questions about purchasing Hoosier tires. All Hoosier tires are sold through Hoosier's extensive distributor network. Retail tire prices are set by individual distributors and dealers. The goal is to have the tires you need when you need them. The extensive Hoosier distributor network was developed to bring American made tires closer to the end user as well as provide product support on a local level using many tire experts. If you want to become a member of the Hoosier "family," contact them about arranging a purchase. Find them online at www.hoosiertire.com/DIST/disthtsw.htm!