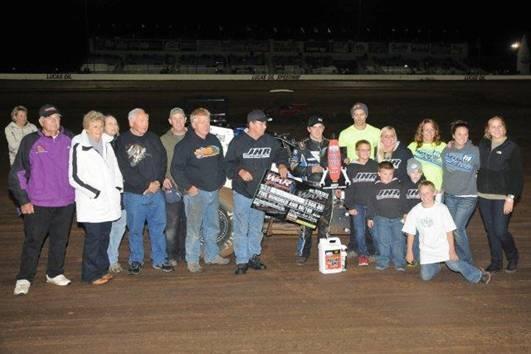 (Bill W) October 4, 2012 – To win two features in one night is one thing. To do it in honor of someone you have the utmost respect and friendship for is another! Brady Bacon was able to do just that last Friday night at the Jesse Hockett/Daniel McMillin Memorial. The event was sanctioned by both the Lucas Oil ASCS National Series and the WAR non-wing series. Brady’s non-wing victory came aboard the Jesse Hockett Racing #77.
Brady ran second in his Friday ASCS heat race after starting fifth. “It had rained a lot and it was pretty rough,” he says. “We actually got a good spot in the heat and we had a good car. We struggled with the ruts in three and four a bit, but we were able to get up to second. We had a good package to get through the rough stuff while most struggled.”

A redraw of two put him outside of row one for the main event. “We had to hit our marks and stay out of the rough stuff,” says Brady. “We were able to do that. Brian (Brown) got us on the start and led the first few laps. I was able to get by him. We were really good the first 10-15 laps. The track kept getting rougher, and we got tighter and tighter. I think it was the same for everyone, and we still had a good car at the end.”

The night in the non-wing car saw a clean sweep that included a heat win. “The non-wing car was good too,” says Brady. “I think we won the heat. They kept trying to smooth the track out, but it was just so soft there. It kept peeling up.”

Starting fourth in the main event, Brady would win an entertaining battle for the lead. “I was able to get to second pretty quick,” he says. “We raced with Austin Alumbaugh for several laps before I was finally able to get underneath and get by him. It was pretty smooth sailing from there.”

It was one of the biggest honors in the Broken Arrow, Oklahoma driver’s life. “It was so awesome to win the non-wing and wing features in the same night at the Jesse Hockett/Daniel McMillin Memorial,” he says. “Jesse loved racing both so to be able to win both at that race was pretty cool.”

Locked into Saturday’s finale, Brady drew a starting spot outside of row two. “It was pretty much rubber-down from the start,” he says. “You just kind of had to get in line. We almost got beside Shane (Stewart) one time, but we couldn’t quite get around him by the time I got back to turn one. I just had to be patient.”

The Brady Bacon Racing #99 would checker third. “Brian got into a lapped car, and we were able to get by him,” he says. “Other than that, we got in line and waited for the end.”

Brady would suffer a DNF in the non-wing feature after leading. “It took rubber the last ten laps of the non-wing feature,” he says. “We started seventh, and actually got to the lead. We had a restart and I was on the bottom. I slid off the end and hit the wall. It knocked the tail end loose. We actually kept going after that. Under caution, we realized the tail tank was coming off, so that was it.”

The versatile driver is ready for three nights of non-wing sprint car and midget action starting at tonight’s Gold Crown at the Tri-City Speedway near Granite City, Illinois. “We’ll be driving the PPM Titanium/Infinity Shocks midget and sprint car all three nights,” says Brady. “I’m looking forward to it.”

Made especially for larger heads, extra wide to fit even the biggest heads, Fatheadz Eyewear is a leader in the industry. Whether you need sunglasses or prescription eyewear, Fatheadz has a variety of frames to choose from. Buy oversize Fatheadz sunglasses online at www.Fatheadz.com and save!
Associate Marketing Partner of the Week – Hoosier Tire Southwest

Hoosier Tire Southwest is located in beautiful Balch Springs, Texas. They can be reached at 1-972-289-RACE (7223). Call them if you have questions about purchasing Hoosier tires. All Hoosier tires are sold through Hoosier's extensive distributor network. Retail tire prices are set by individual distributors and dealers. The goal is to have the tires you need when you need them. The extensive Hoosier distributor network was developed to bring American made tires closer to the end user as well as provide product support on a local level using many tire experts. If you want to become a member of the Hoosier "family," contact them about arranging a purchase. Find them online at www.hoosiertire.com/DIST/disthtsw.htm!