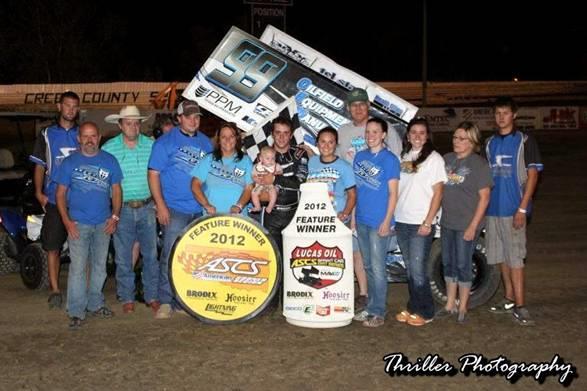 (Bill W) August 22, 2012 – Brady Bacon had things working to perfection in his Brady Bacon Racing #99 as he grabbed the win last Friday night at Creek County Speedway near Sapulpa, Oklahoma. It was the highlight of a week that also saw mechanical problems in Salina, Kansas and a sixth place finish in Lawton, Oklahoma. The Lucas Oil ASCS National Series has two events planned this weekend. They will head to the Salina (OK) High Banks on Friday before venturing to “Hammer Hill”, the I-30 Speedway near Little Rock, Arkansas.

The Broken Arrow, Oklahoma driver spent much of his youth honing his skills at Creek County. “I’ve had a lot of laps at Creek County, so I was really excited to go there,” he says. “We were really good all night. We started seventh in the heat, and would up second. The track is really small. You don’t get a lot of speed up. The wing doesn’t play as big a part, and that plays into my hands.”

Starting third in the feature, Brady took little time in getting to the front. “We were able to get to second,” he says. “It took a few laps to get by (leader Aaron) Reutzel, but once we did, we were able to run the top or the bottom. It was tricky in three and four, but it was where you had to be. Everyone was having trouble with that. I was really able to rotate the bottom in one and two better than anyone, and that helped me get through lapped traffic.”

One late caution put Kevin Swindell on Brady’s nerf bar to the finish. “We were able to hold off Kevin after that late restart,” he says. “You get to lapped traffic quick there. You just have to be careful. Hitting the bottom of one and two really helped.”

A fourth place run in his heat at Salina (KS) Speedway was not bad considering the company. “We were going to have a pretty good run at Salina,” says Brady. “It wasn’t the best heat race to run in. We had the top four in ASCS points in there. That was pretty tough.”

Brady started the feature inside row six, but would suffer a DNF. “We were actually moving up pretty well,” he says. “The motor started missing a little bit. It definitely got worse and worse. We were running about sixth when we dropped out. It was either a mag or ignition box going bad. The motor checked out o.k. afterwards.”

Saturday at Lawton Speedway, Brady won his heat from the pole. “There was a lot of water on the track…it was really heavy for the feature, and I may have run more stagger in the heat than I have all year long,” he says. “I actually ran a 90 inch tire.”

Brady would checker where he started, sixth. “That place is known for getting slick fast, and we tightened up just a little too much for the feature,” he admits. “We were way too tight on the cushion. Three or four laps in, I biked up and almost got upside down. I think I faded to about twelfth. We were able to get back up to sixth. We saved a decent night out of it, I guess.”

At Triple X Race Components, we don’t just build race parts – we race too. We know how expensive it is to race. That’s why we offer the most common Sprint Car, Midget, and 600 Mini Sprint parts. We keep our costs down by building thousands of each part. We build the parts that get damaged the most. With our discounted pricing, you can afford to race hard and race to win. All Triple X components are produced in our ISO 9001 certified factory. They are laboratory tested, race tested, and universally approved. Whether you are a new customer or a repeat customer, you can be assured that you’re buying race-proven products at great prices. We guarantee it. Triple X has established a large network of dealers coast to coast and internationally to serve your needs. Please stop by your local dealer and check out our newest products. Check Triple X Race Co. out on the web at www.XXXRaceCo.com!

With ThreeWide designing different designs daily and 1000 products in stock, they are hitting the racing and motorsports world with force, building a prestigious family that includes Kraig Kinser, Jason Sides, Brady Bacon, Austin Hubbard and more. From the dirt tracks of the East Coast, to the dirt tracks of California and the road courses of countries across the sea, ThreeWide is here for all kinds of racing worldwide. Matt “Slim” Riesselman had a vision of starting a clothing brand for the race enthusiast and fans alike, and so far, this vision is not only a reality, but a growing success. Since its start, ThreeWide has been hard at work fulfilling their dream of providing unique and quality motorsports clothing to their consumers, and so far, they’ve made it happen and show no signs of slowing down! Visit them online today at www.Wear3Wide.com!