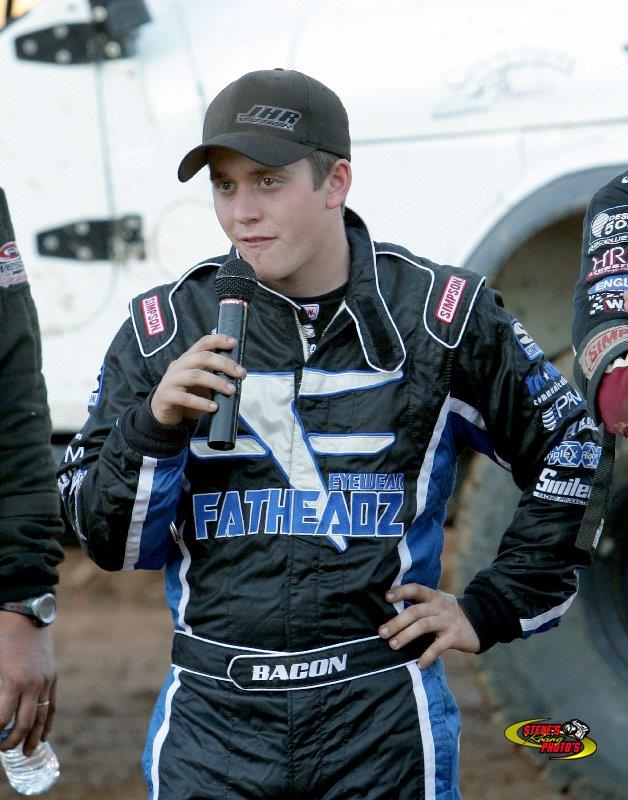 (Bill W) November 22, 2011 – Brady Bacon finished his strong second half run to record a third place points finish with the Lucas Oil ASCS National Series at USA Raceway in Tucson, Arizona last weekend. He would also shed the wing and finish second with the ASCS-Canyon Series in Saturday’s finale. Brady Bacon Racing will now prepare for their 2012 campaign, which looks to be even better!

In ASCS National action, things started on Thursday when Brady ran second in his heat race after starting on the pole. “We didn’t get a great start, and (Sam) Hafertepe got us,” he says. “The track was really heavy and tough to pass. Where you went into turn one was kind of where you finished.”

Starting ninth in the preliminary feature and needed a top eight finish to lock himself into Saturday’s Western World finale, Brady would checker seventh. “We were able to get up to seventh on the original start,” he says. “Unfortunately, I got into the back of Lucas Wolfe and knocked my front nose wing down. That hurt us quite a bit. The track was heavy and you needed to be on the bottom. The extra downforce would have helped.”

In Saturday’s finale, Brady did a little point racing. “We were able to lock ourselves into Saturday’s feature (on Thursday),” he says. “We had a pretty good car in the feature Saturday. I think we got up to tenth or so. I knew I had to finish a certain number of spots behind Jeff Swindell and I could see him in front of me.”

After starting thirteenth, Brady would finish seventeenth. “There were some sliders on the top of one and two and the curb was almost to the wall,” he says. “I was trying to stay out of a crash, because I had to finish in a certain spot. There was a lot more money on the line in the points than on the track. I tried to take care of that end and it worked out. We had a faster car than the results showed.”

After a slow first half o 2011, Brady caught fire with several solid finishes down the stretch to end up third in ASCS points. “We had a lot of little things happen that just didn’t go our way,” he admits. “After Knoxville, we got rolling again and got finishing back in the top five consistently.”

The non-wing action started on Friday night with the prelim. “We started sixth in the heat, and I think we had five of the fastest racecars on the night in our heat,” says Brady. “Levi Jones, Robert Ballou, Tracy Hines, Johnny Herrera and I were all in it. They all started on the first two rows. It was the first heat of the night, so there wasn’t a whole lot of room to pass. I was on Herrera for fourth the whole time, but the track was just too narrow.”

The fifth place finish resulted in a starting spot inside row seven for Friday’s feature. That didn’t slow down Brady. “We were able to drive up to second,” he says. “We worked the bottom for the first part, and drove the top in the end. There was only one caution. We were able to get by three cars early by running the bottom. We were eighth by the caution. After that, we moved up one at a time by sliding them in turn three.”

The result was a strong second place run. “We were better on top at the end and gained on them in a hurry,” says Brady of his charge. “I had to time my passes going down the backstretch and sliding them in three. We definitely had the best car, but we started too far back and didn’t get the cautions we needed.”

The finish set Brady up outside row two for Saturday’s finale. He was trying to make it three in a row in the event. “They reworked the track beforehand, so the first four or five laps were pretty heavy,” he says. “Everybody was fast. It took about ten laps to get by Jerry Coons for second. Once I got by him, I caught Tracy (Hines). I slid in front of him and took the lead. In lapped traffic, I was working the bottom, and he snuck beside me one time on the front straight and was in front at the line. I had the preferred line after that, but there was a caution on the one lap I didn’t need it.”

Restarting second, Brady found himself in a dogfight with Bud Kaeding for second. “From there, the track got away a little bit,” he says. “It was fast enough on top that it was hard to get a run on (Hines). I tried the bottom of three and four one lap, and Bud Kaeding got by me. The cushion had gotten big and curby. Bud was struggling a little bit, so I couldn’t get too close. We were all struggling a little bit. On the last corner, I took the bottom, he bobbled a little bit and I was able to take second. The race was ours for awhile. We just had some bad luck and things didn’t go in our favor.”

Follow Brady at his website located at www.BradyBaconRacing.com! Also keep up with him on Facebook and Twitter (which also can be accessed at the website) at the following links…
Twitter Link – http://twitter.com/BradyBacon
Facebook Link - www.facebook.com/pages/Brady-Bacon-Racing/278125555137
Partner of the Week – Fatheadz Eyewear
Made especially for larger heads, extra wide to fit even the biggest heads, Fatheadz Eyewear is a leader in the industry. Whether you need sunglasses or prescription eyewear, Fatheadz has a variety of frames to choose from. Buy oversize Fatheadz sunglasses online at www.Fatheadz.com and save!